Our wacky hero Big Macintosh returns in another sick, disgusting installment from the mind of a freak who needs to be in a psych ward. Big Macintosh knew that horror and rage and grief and shock were all flooding her at once, waging a war in her mind. She swallowed hard, and the words finally sputtered out. This is REAL nice! 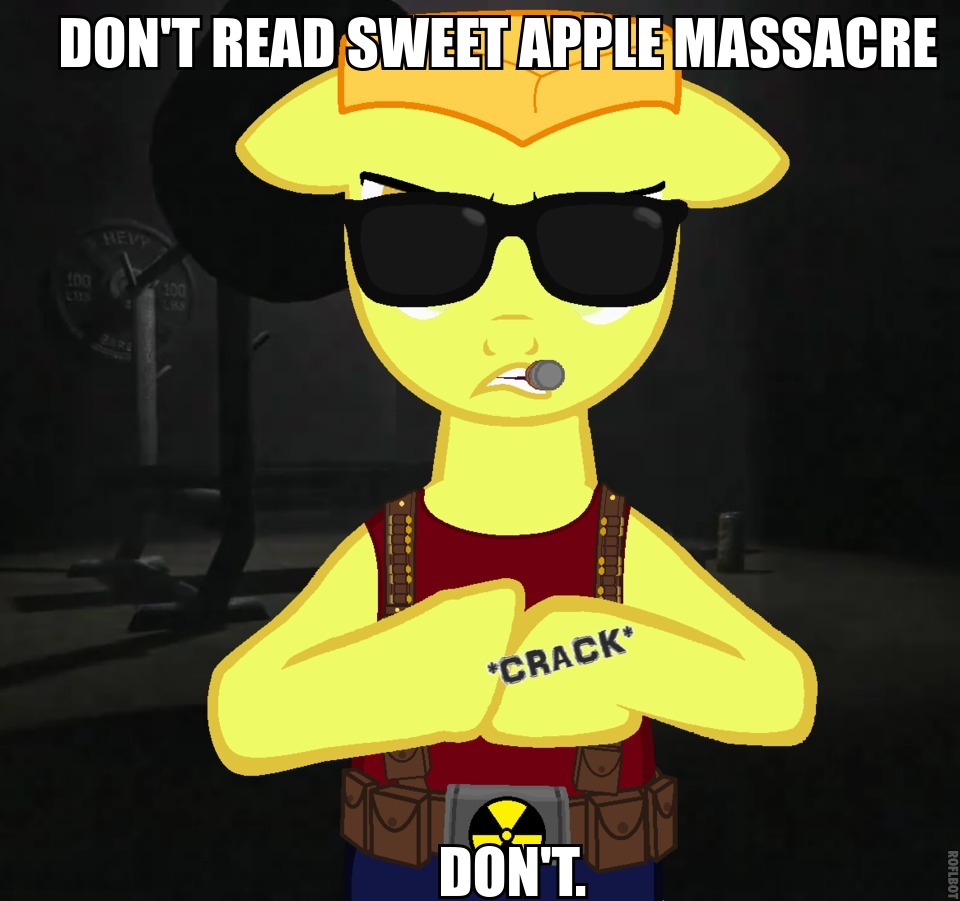 Mercury I do not own sweet apple massacre or MLP friendship is magic. This is a spin off of the cliff hanger of Sweet Apple massacre.

This is simply a spin off. Now what's this about timber wolves? Rainbow took a deep breath then screamed,"Timber Wolves are attacking the town!

Sorry Big Mac, you'll have to show me that thing later. She heard a sigh, of frustration? She must have imagined it. Big Mac didn't get frustrated. And with that she raced after Rainbow dash to take care of the timber wolf problem.

Down in the cellar Big heaved a sigh of frustration. Oh well there's always later.

He looked at the mangled corpses of the cutie crusaders and swelled with pride in his work. He picked up his former captives who were still dripping blood and draped them over his back and climbed out of the cellar.

He turned his back to close the door when he heard a strangled gasp of horror. He turned around to see Granny Smith standing at the door of the barn. What is that, where did you find them and why is your coat covered in blood? He didn't want to kill the old pony but she had left him no choice.

He dropped the bodies of his victims in the floor and moved slowly towards the old pony. Meanwhile Granny Smith remained frozen with fear. Big Mac stepped behind her and shut the barn door.

Her screams of terror were abruptly cut off. Slipstream considered himself to be quite good at flying. Not as fast as Rainbow Dash but still quite good.

He was flying low over Sweet Apple Acres when he caught a whiff of something unpleasant and very familiar. His eyes went wide when he realized what it was,"no not here as well. Slipstream had a troubled past. Ever since was a billy he had been trained by the PIS. Unfortunate acronym but the Pony's who worked for it were anything but funny.

An elite group of Pony's, unicorns and Pegasus' who were trained to protect the nation of Equestria under the shadows of secrecy. Slipstream had been assigned to Ponyville after his last mission had taken a bad turn in clouds dale. His superiors believed that he needed some relaxation before they sent him out on anymore missions.

He had pure black feathers and a green mane with black highlights which was messy all over.I don't see what the big deal is.

I've read so much worse. I'm not gonna say it was sunshine and lollipops but it sure as hell wasn't the worst. Mlp Creepypasta stories.

The World Sometimes Sucks (my own version because I thought I should change it up a bit) Applejack had realized what was happening to the world. All her friends had gone completely insane while she was the only one left.

She had to protect everyone else so they would be alright as well. This file contains additional information, probably added from the digital camera or scanner used to create or digitize it.

If the file has been modified from its original state, . Sweet Apple Massacre [Grimdark] Horror He looked at the disfigured corpses of the three fillies, all now barely recognisable as the oh-so-sweet Cutie Mark Crusaders, and realised he felt strangely unsatisfied.

It had all been a bit too quick and easy. Now Applejack that would be a initiativeblog.coms: On September 21st, an entry for “Sweet Apple Massacre” was created on the database TVTropes, which listed elements of the story as an example of the “High Octane Nightmare Fuel”, “Complete Monster” and “EyeScream” tropes.

Sweet Apple Massacre is a grimdark fanfiction set in the world of My Little Pony: Friendship is Magic (MLP: FiM), in which the colt Big Macintosh rapes and murders the juvenile Cutie Mark Crusader ponies. The story bears many similarities to another infamous MLP.